Exabytes Annual Dinner 2011 was filled with laughter, excitement and many alluring prizes. When the Organizing Committee announced that this year’s annual dinner would be held at Tanjung Bungah Beach Resort by the white sandy beach, our hearts beat faster in anticipation.

Registration started at 4.30pm and door gifts – pouches which filled with 2 packs of kiam piah, 1 Ang Pow, 4 voting papers and 2-3 origami papers of our group colors were distributed. 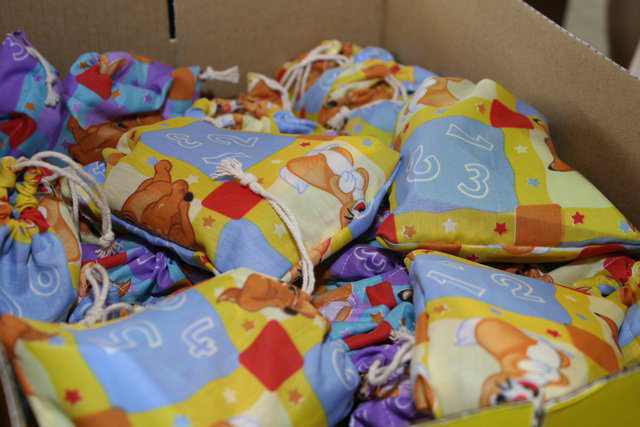 The fun began from the first game ‘Find Your Path’. A game which tested our luck, IQ as well as responses, it was played to determine the amount of time each team would have to fold their paper bunnies in the second game. Each team (Team1-5) would take turn to roll the dice and answer an IQ question. If the team was lucky and got the number which matched their group number, they could skip the IQ question and won themselves one point which was equivalent to one minute in the next game. However, one point would be deducted for every wrong answer given. Outcomes – Team1: 5 mins, Team2: 6 mins, Team3: 7 mins, Team4: 8 mins, Team5: 9 mins 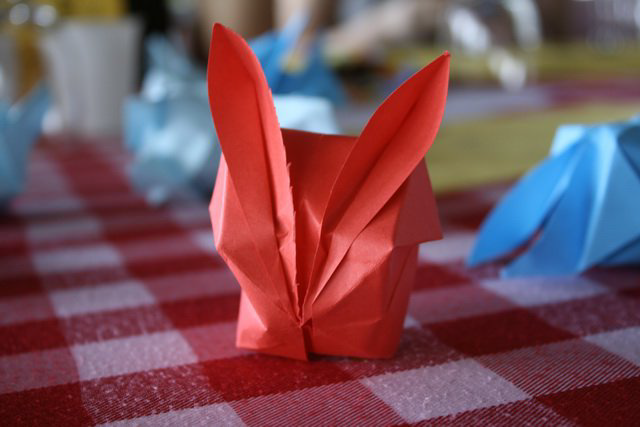 Subsequently, it’s ‘Who Wants to Have a Bright and Promising 2011?’ Based on the outcomes of “Find Your Path’, Ee Dawn the Origami master (Origami – the art of paper folding) couldn’t wait to teach everybody the ‘secret techniques’ to produce a good paper bunny for the Year of Bunny. After the less official Origami teaching session was conducted to each team to produce the prosperous paper bunnies, we learnt that having folded the most number of paper bunnies didn’t guarantee us a win in this game. Instead, we had to find and ‘feed’ our bunnies the REAL CARROTS of different weights which were hidden all over the place! 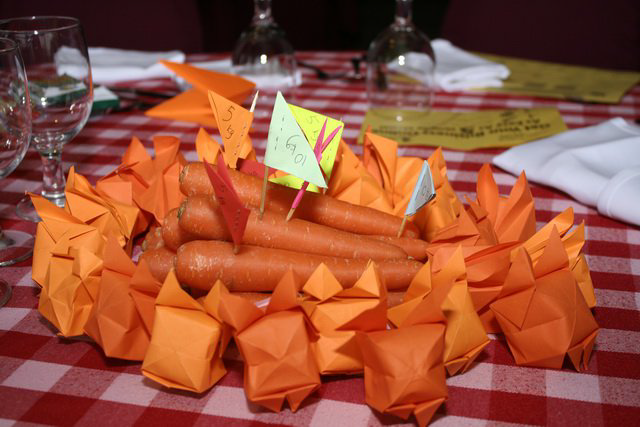 Since prosperity among Exabees had been ‘guaranteed’, we were ready to get down to serious business. The official opening ceremony was then carried out by Jin Wee the OC, followed by the official speech by CEO Chan Kee Siak or more fondly known as ‘Ah Chan’. Chan then touched on the introduction of Exabytes’ investors who were also present at this year’s Annual Dinner. Dato Tan, Exabytes’ very first investor took over by giving us a friendly and warming intro on his fellow investor friends. 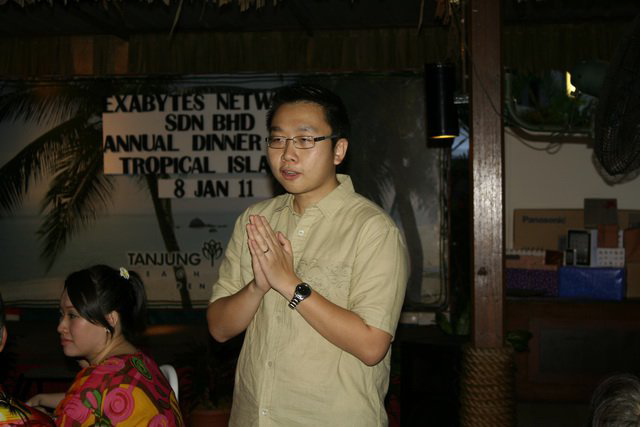 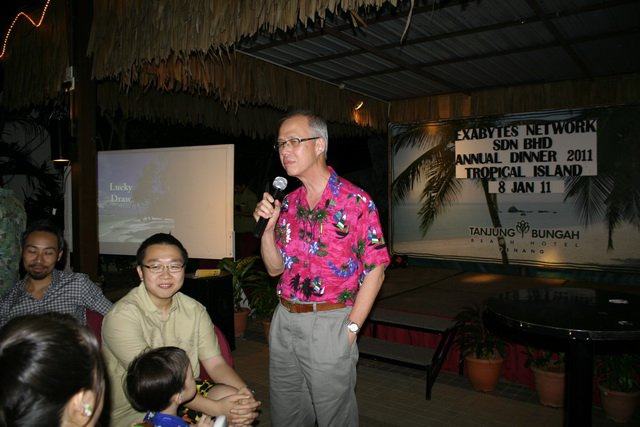 Next, it was the sensational showcase of MAGIC MUGS and ‘Try Your Luck in 2011’ – the 4D voting game! Before you get too excited reading this, our 4D voting game was nothing like the 4D number prediction game such as Sports Toto or Magnum. Instead, we were to guess which faces of the investors would appear on which MAGIC MUGS when hot water was poured into them. (The magic mugs appear solid black when no hot water is poured into it) As the magic mugs were placed in a random sequence in a straight line, and our 4 investors are represented by letter A, B,C and D, we were to guess their faces on the magic mugs by placing our ‘bets’ like BDCA / DABC / DCBA. 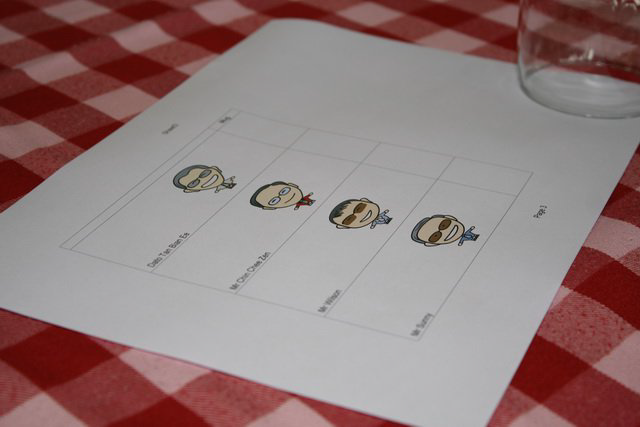 Each investor was represented by an alphabet letter 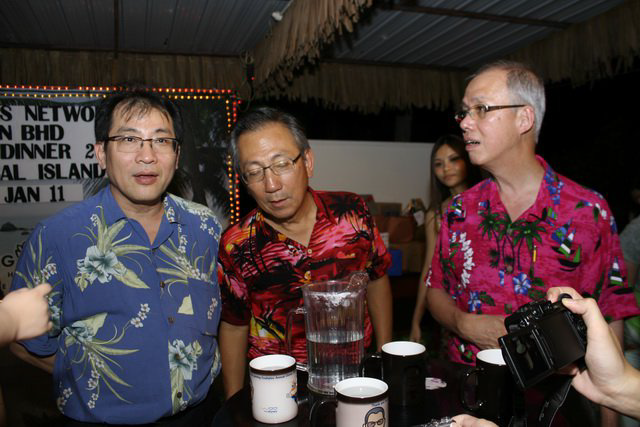 The ‘Transformation’ process of the magic mugs

Ms Ooi, Siew Hoon, TL Guan, KY Chan and Jackie at the same table emerged as the winners! Guys, we really envy you for being so lucky even at the beginning of the year. 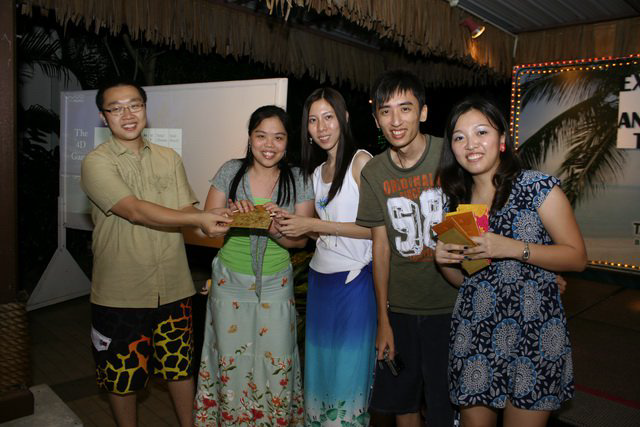 And so, it’s dinner time! Standing before the great variety of food prepared by Tanjung Bungah Beach Resort, many of us started to show our true colors / gluttonous faces. 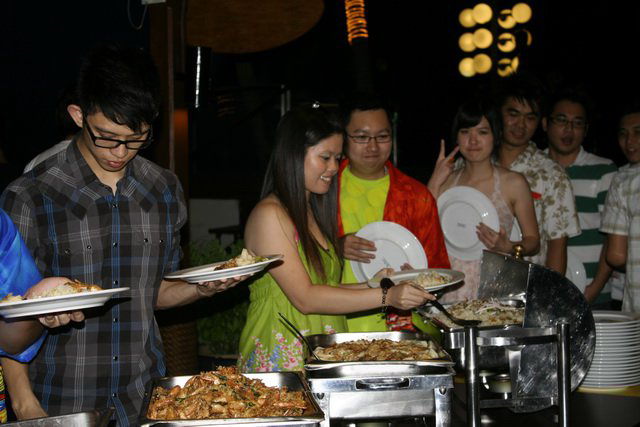 Having satisfied our discerning palate, it’s the exciting and long awaited lucky draw which saw more than 25 prizes being given away. However, our eyes were still glued to the grand and second prizes – the iPad and 32″ LCD TV. 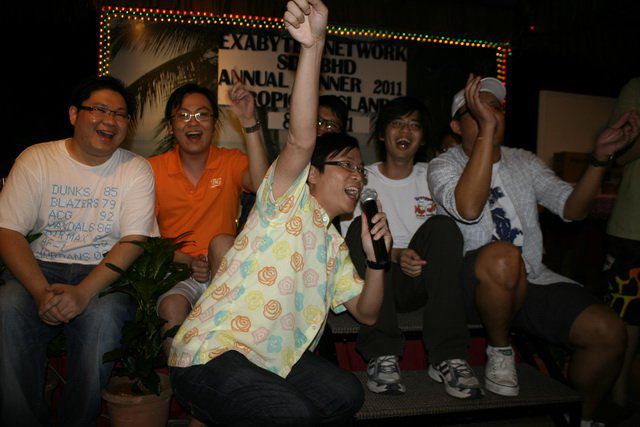 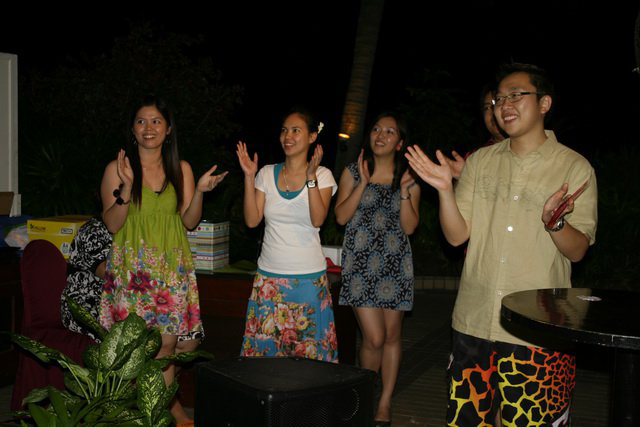 Cheering for our ‘professional’ singers

To put the excitement brought by the grand and second prizes on hold and save us the suspense, the OC decided to take this opportunity to announce Exabytes’ 5-year Honorable Service Award. We are excited and proud to present to you the very loyal and dedicated staff members who have in the past 5 years stayed with Exabytes through thick and thin – TL Guan, Gaveen, Annie Ong and David Ch’ng. 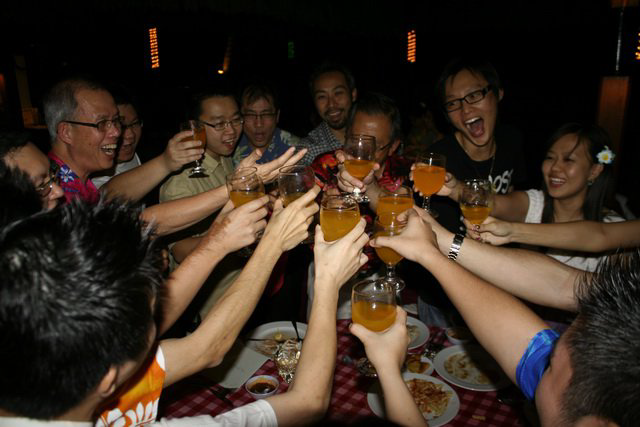 Next, was to announce the very fashion savvy male and female who wore the most awesome dress of the night. And Yeah! Yeah! Yeah…! Many of us had guessed it right earlier, it’s May Fong and Gaveen! Each of them received an Ang Pow and a big round of applause for being the best dressed male and female. 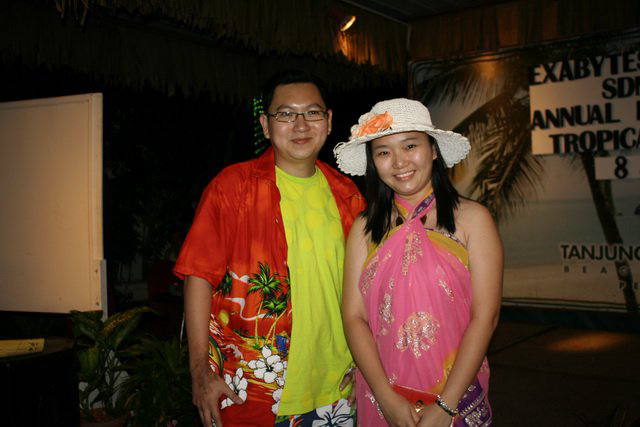 Gaveen and May Fong, our best dressed male and female of the night

Finally, it’s the moment of truth. With CEO Ah Chan holding in his hand the names of the much envied grand and second prize winners, we held our hands together, praying that our names would be called. And the lucky winner was……. Mrs. Dato Tan!!

Without any hesitation, the very gracious and generous Mrs. Dato decided to donate the iPad she had just won so that Exabees could have another chance to win it! OMG, this got us extremely excited again. And when the winner was announced once again, out hearts skipped a beat. It’s……. our system engineer, HP Beng!!

Ah Beng with his ‘evil’ face and smile saying “It’s now mine!” 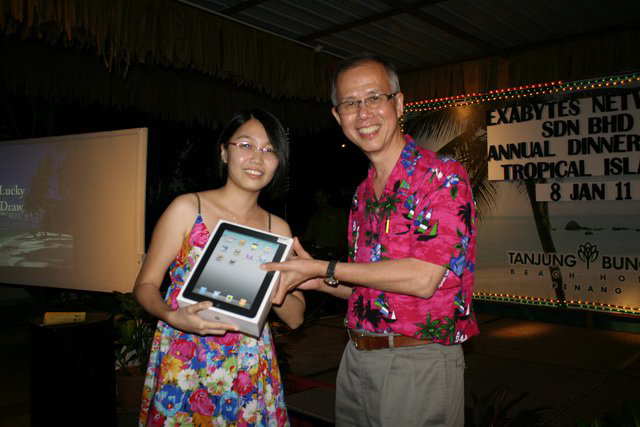 Mrs. David Ch’ng, the lucky winner of the second iPad

We thank Dato Tan and his fellow investor friends for their generosity and kind-heartedness. 🙂 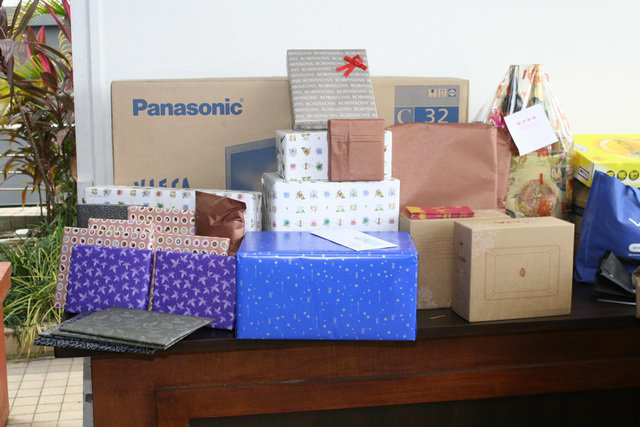 Prizes of the night

25 prizes in total were given away on this memorable night, or shall I say the first gathering of Exabees in 2011. To freeze this important moment, we took group photos one after another, shaking hands with each other before bidding farewell. 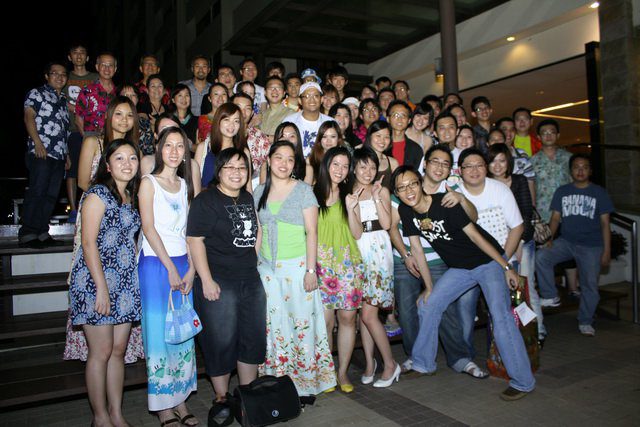 Good bye 2010, and hello 2011! Last but not least, a thousand thanks to our OC for all the hard work they have put in in organizing this sweet and unforgettable event. 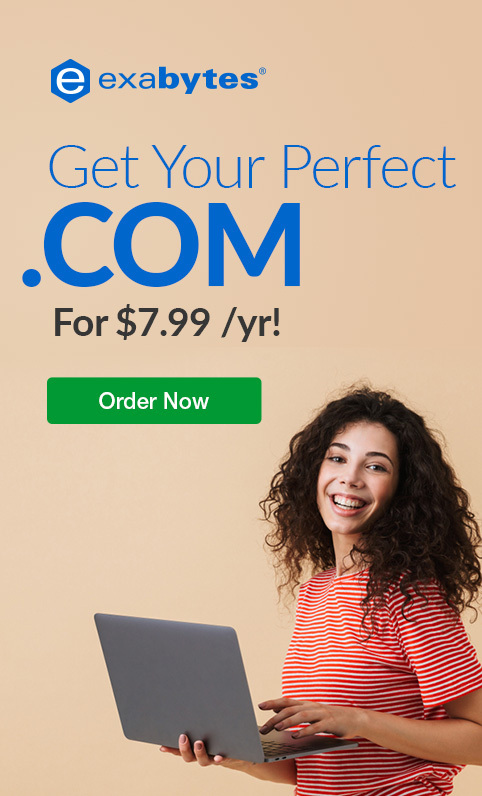 10 Tips on How to Reduce Shopping Cart Abandonment